Where? In Wates, a neighbour village that has land conflict with military air force (brief history : air force were occupying neighbours villages -I think they had the right to do so. During Japanese occupation, Wates inhabitants flew away because they were afraid (carrying their bamboo houses on their back!). After the Japanese went away, the military returned and start occupied all the lands were the Japanese went, including Wates. Jaf members make events to bring the community together, work on the cohabitation with the military and make the case of Wates more known (I guess to government). 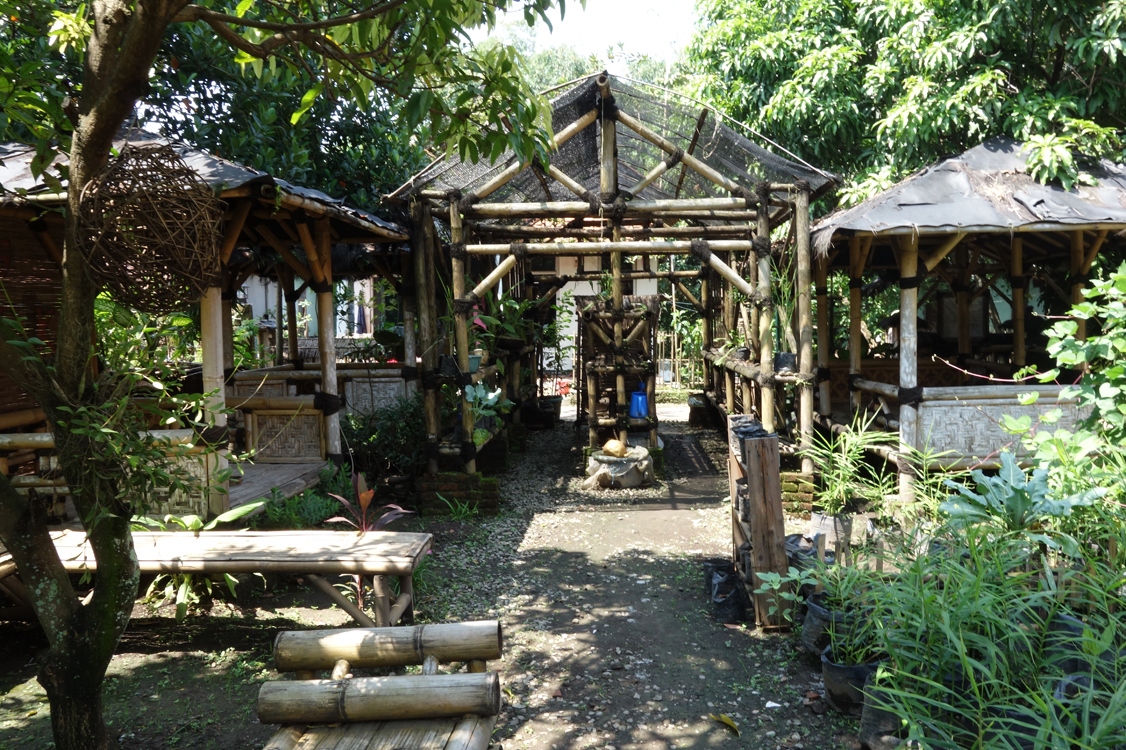 they also build this community garden and resting area

What? A celebration for the harvest of a field of black, organic rice. I think planting this rice was part of a project of Ismal (jaf’s member). The black rice is better for people having diabetes. 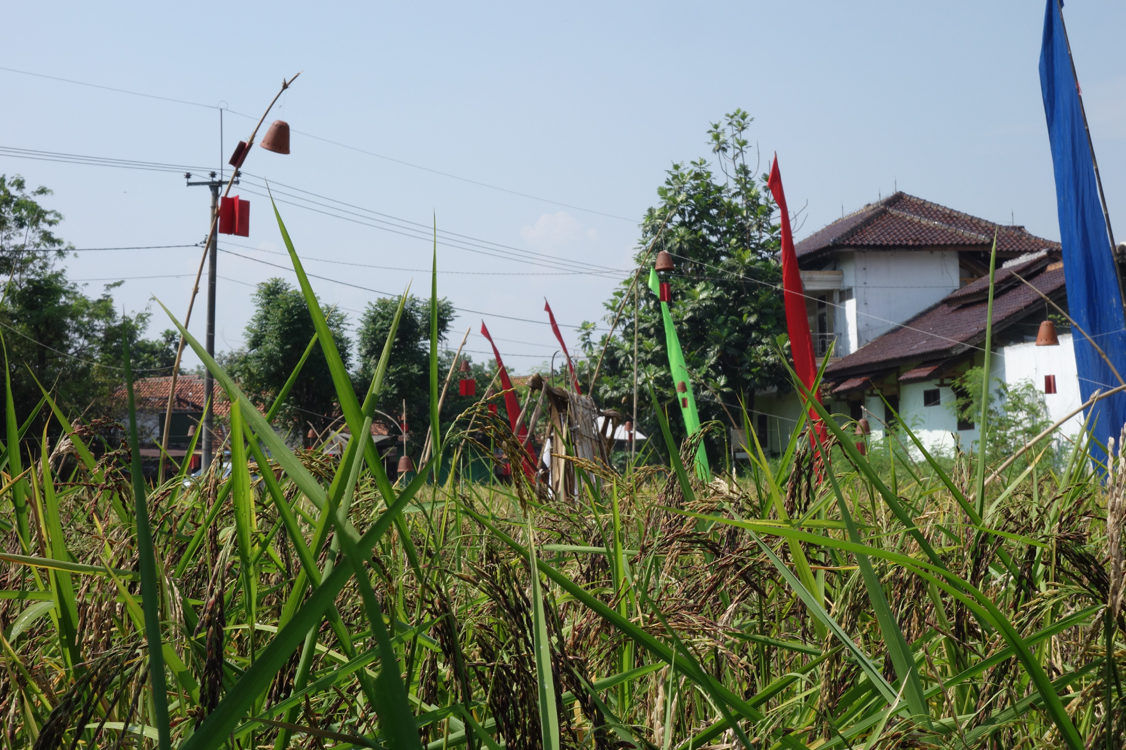 Why? From what I understood, it is artists of Jaf that made celebrations from days of harvest. They are very focused on finding out what is the culture of Jatiwangi and enhancing it, therefore they sort of make rituals from daily activity, enhancing their values and bringing people together. They also say that traditional ways of living have the participatory principles that contemporary artists and designer are looking for. 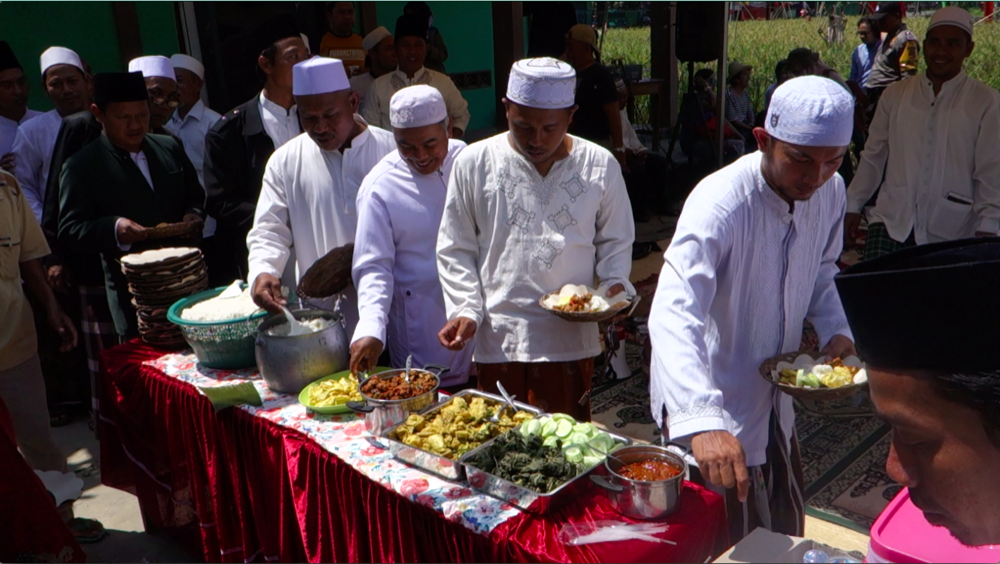 at the end of the ceremony, a shared lunch 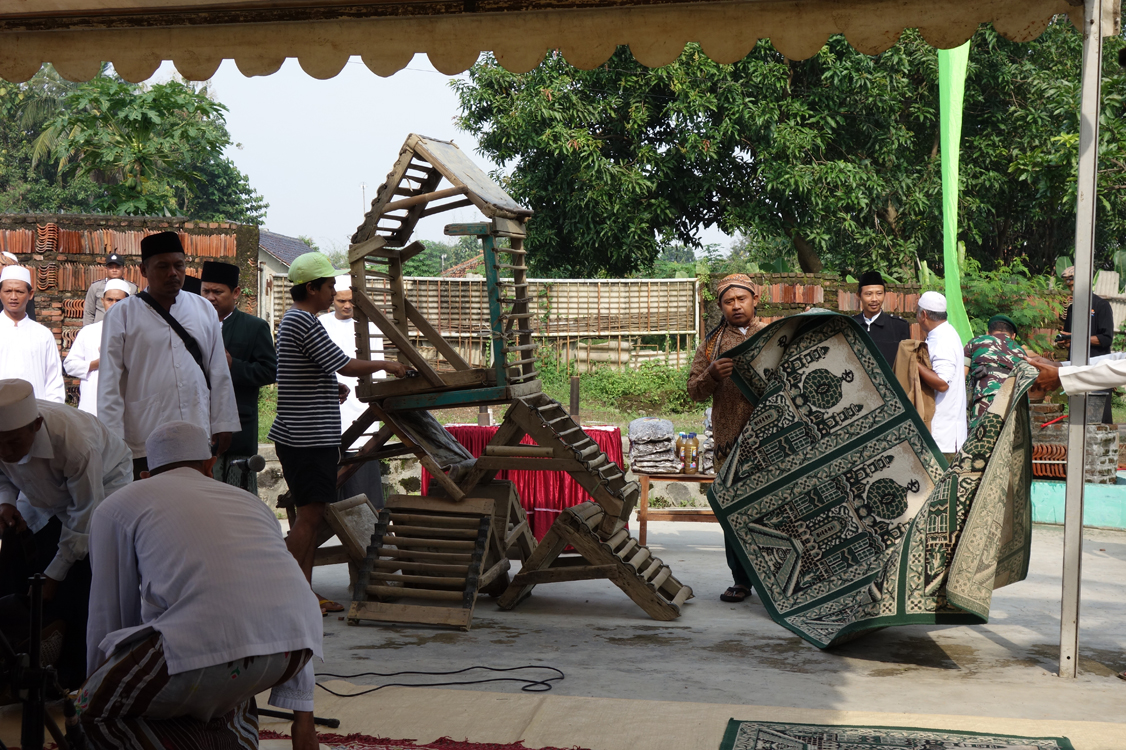 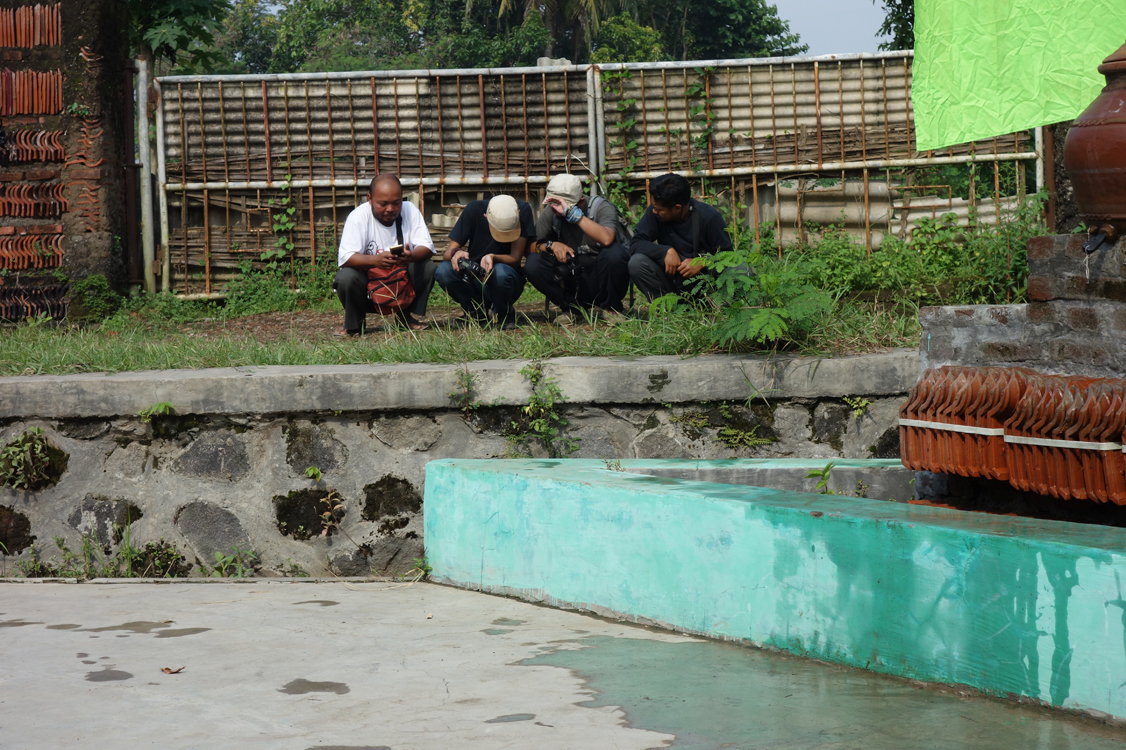 the event was over-recorded. That also, is a important role of Jaf 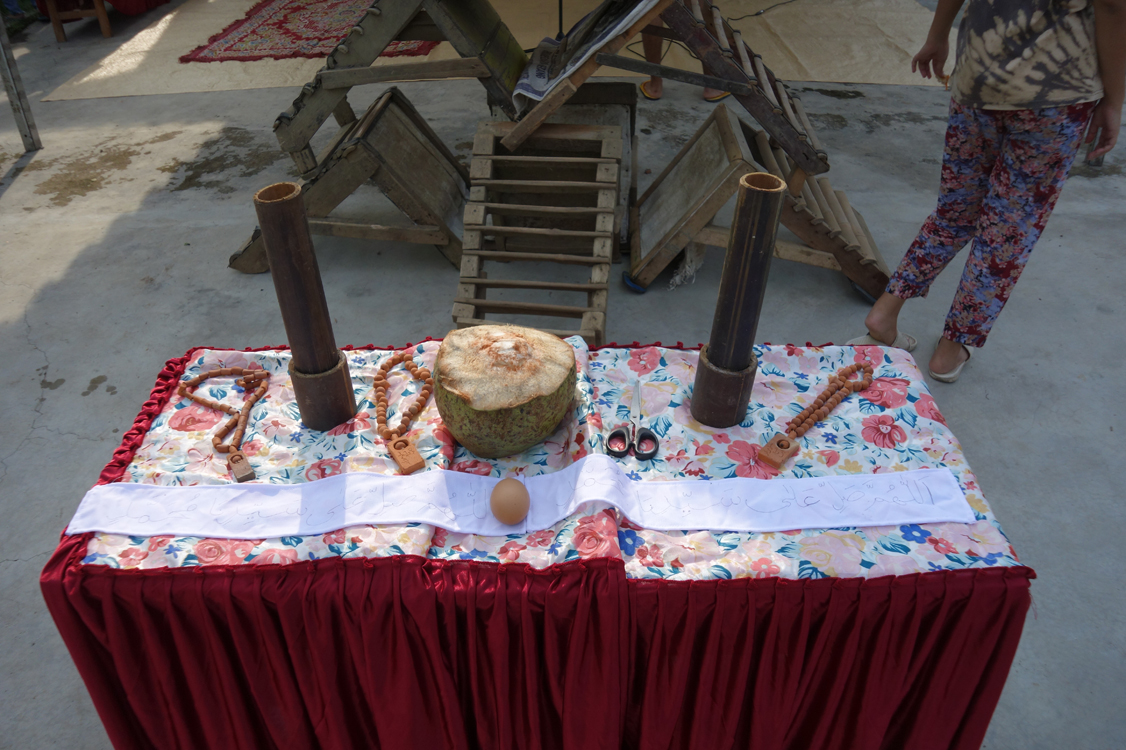 the egg and coconut are symboles, on the textile are prayers ; the head of village will wrap it around the first rice stem and put them in the bamboo. Next to the table organic fertilizers were shown 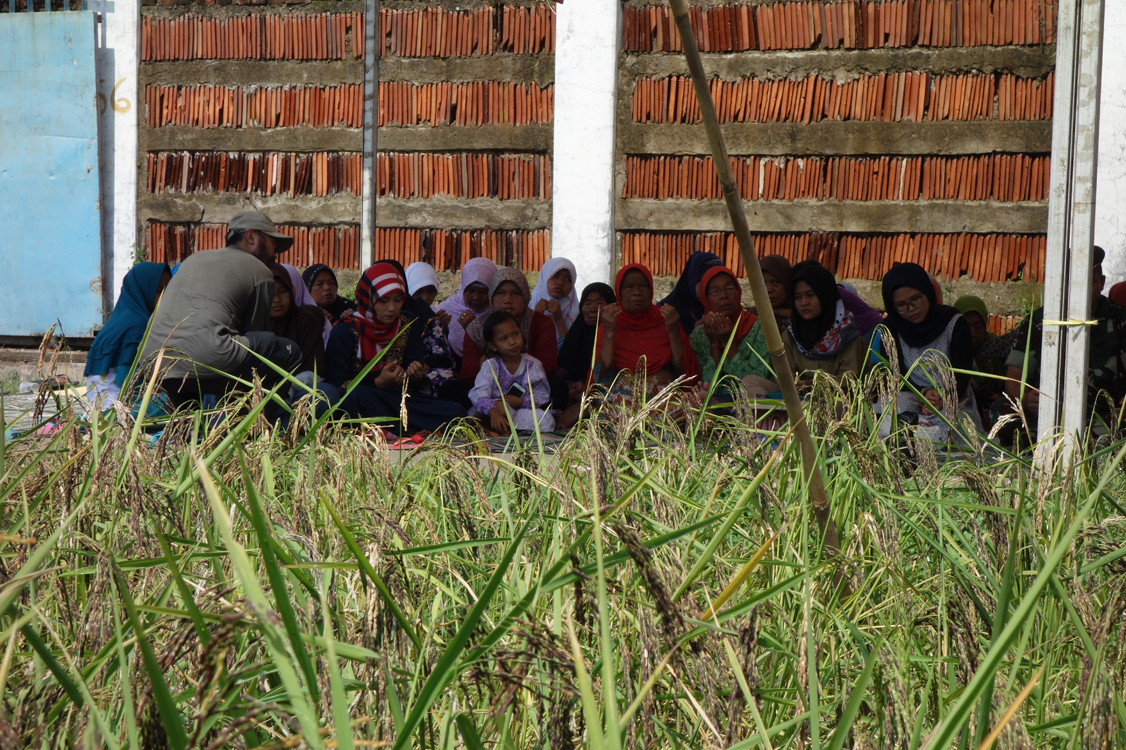 People were sitting under tents in the street, one side men, the other woman and children 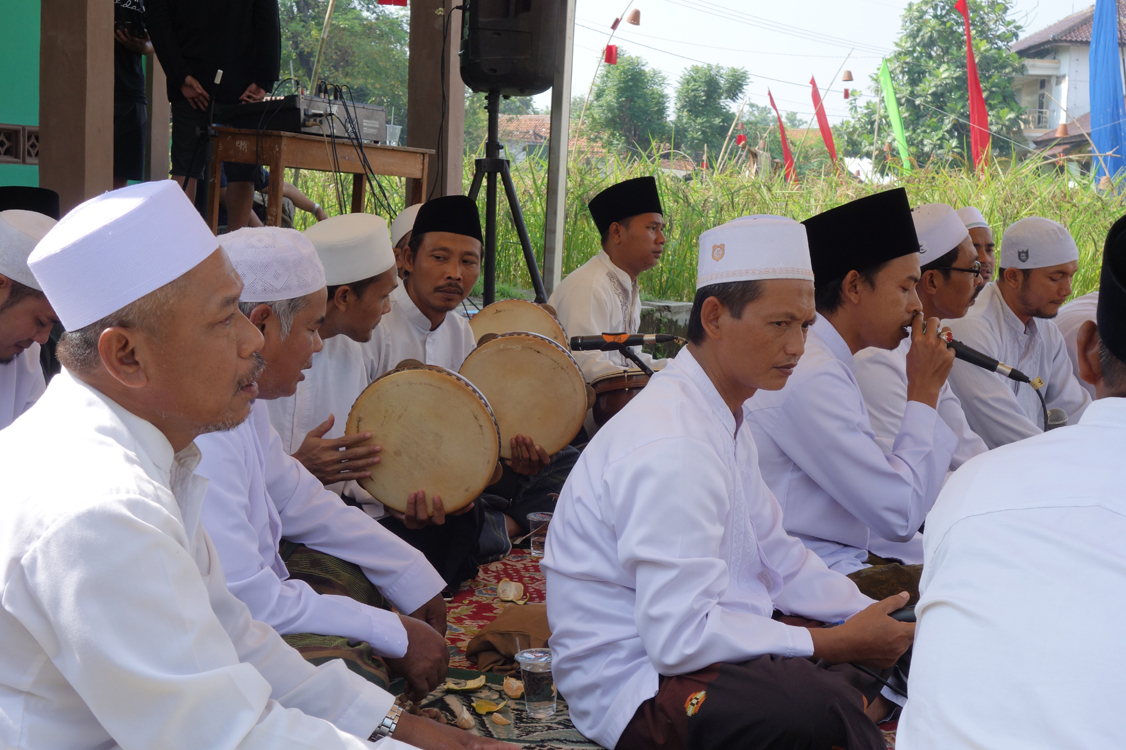 on the main area was a (religious) orchestra

What happened? First a lot of talking : several important people took the mic after each other. Such as the elder of the village (who knows stories of the past and told about the military occupation), a man « who knows about islam », the chief of village (which I please to see is a woman! And I don’t know what she said but she had a lot of claps…), and so on. Then the musicians started singing/praying. In between songs the main singer would say things on the mic ; I though it was religion based but then heard cholesterol and antioxidant in his speech! After quite a time, they cut two rices plants, rolled the stem in a fabric on which is written a blessing and that has some specific perfume on it. They went in a procession around the village. And when they came back, there were food ready for everyone. After eating most of the villagers went home (without actually harvesting!) 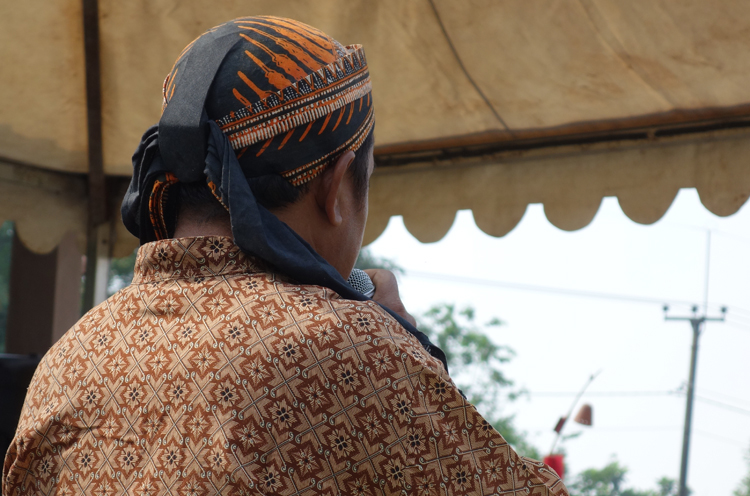 The man who knows about Islam. I was very found of his hat. Everybody was well dressed-up, wearing mostly traditional hand-printed textile named Batik

Here you can listen to the praying songs. It is often very repetitive so they use the clay bracelet to count. The singers sometimes made incredible mouth sounds 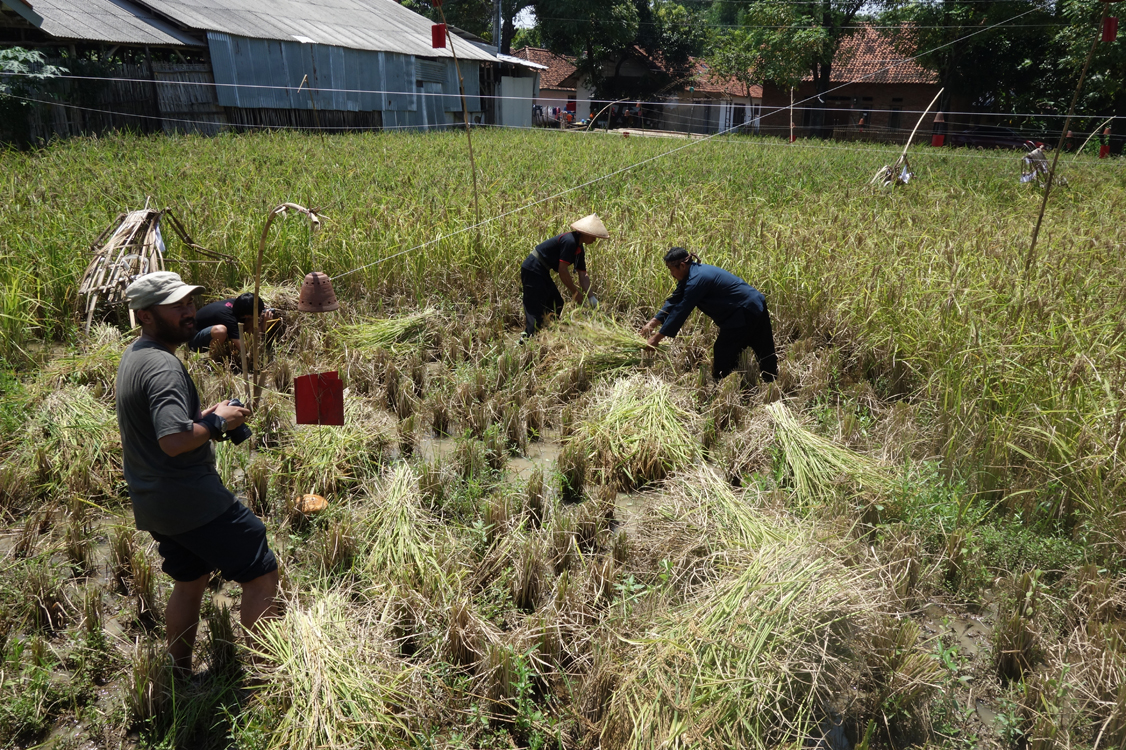 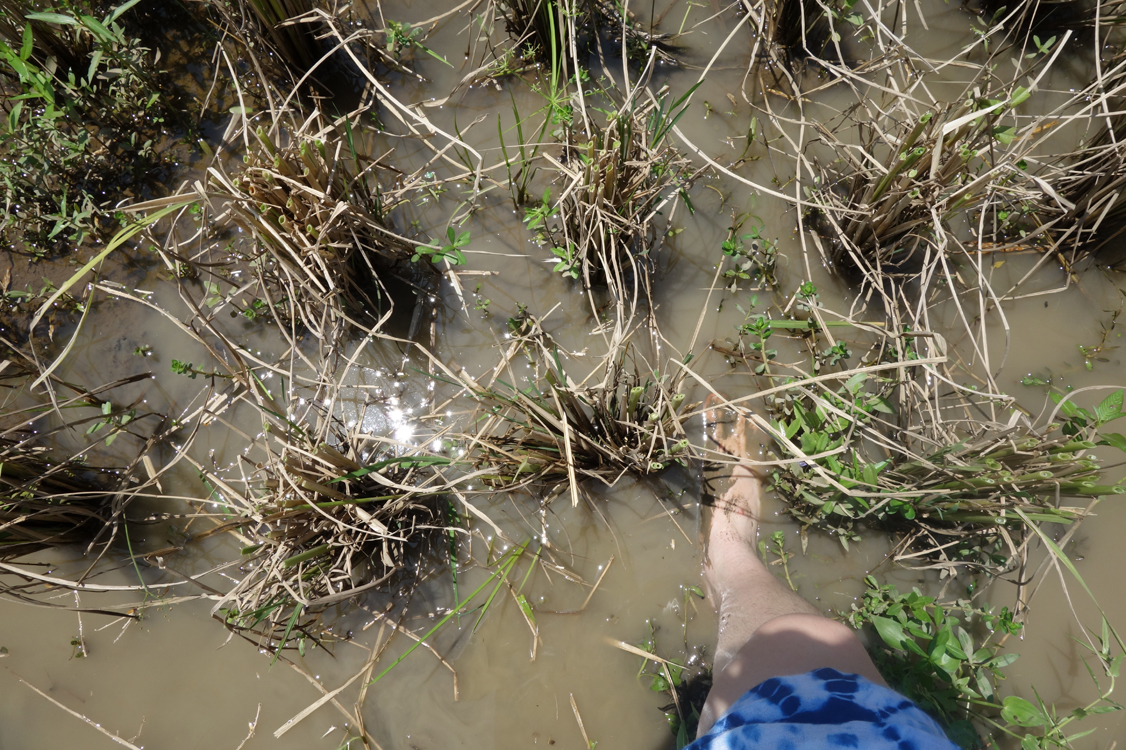 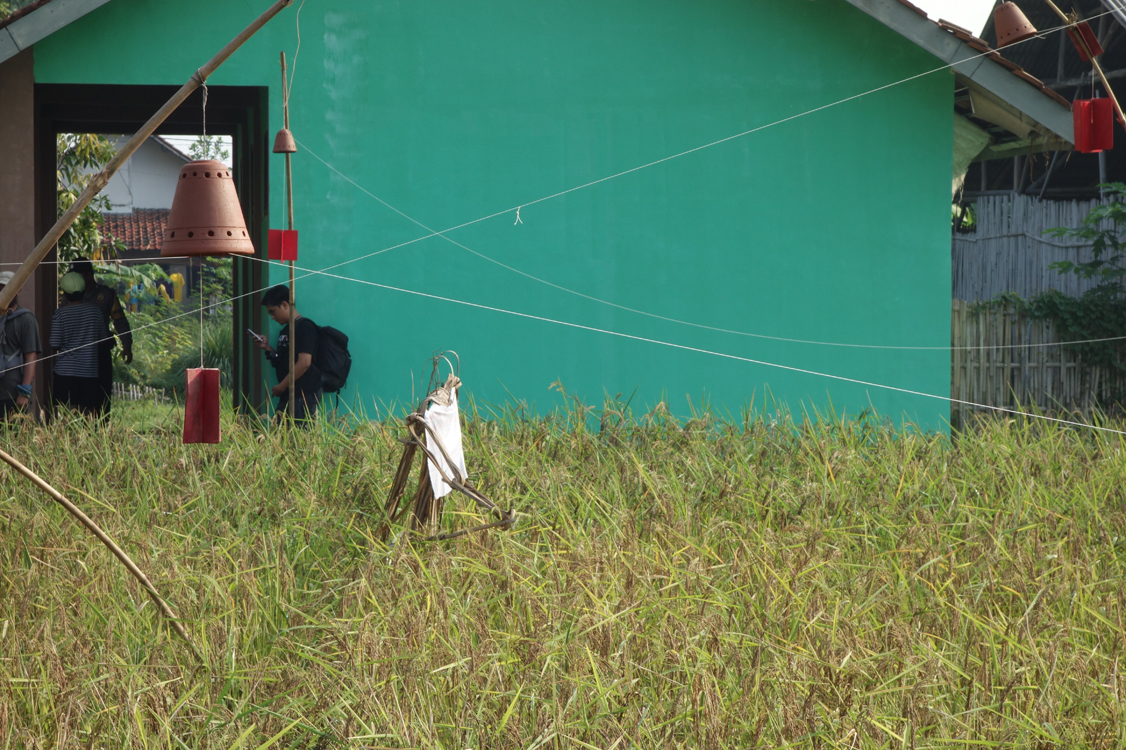 Now about the actual harvesting

Remove your shoes, go the the rice field (warm and smugly) with a curved knife. Cut and handful rice plant at 20cm from the water. Put it on top of what is left. Someone else picks up the cut grass and bring them to the main area. Other people hit the grass onto small wooden tools in order to separate the grains from the stem. The grains are then filtered (to remove smaller stems and grass) and spread to dry. The leftover stems are also dried, and then can be put in a humid and colder place in order to grow specific rice mushroom (apparently it is already in the plant and does not need to be inoculated).